We have been working with glazed steel since 1896. For us, the material is an inspiring driving force and a standard of perfection. But it is water which creates a connection between man and product. As the origin of life, it literally flows into every design. With our basins and washbasins, we have been giving shape to this valuable element for 125 years – in ever new perfection.

A child of
its time 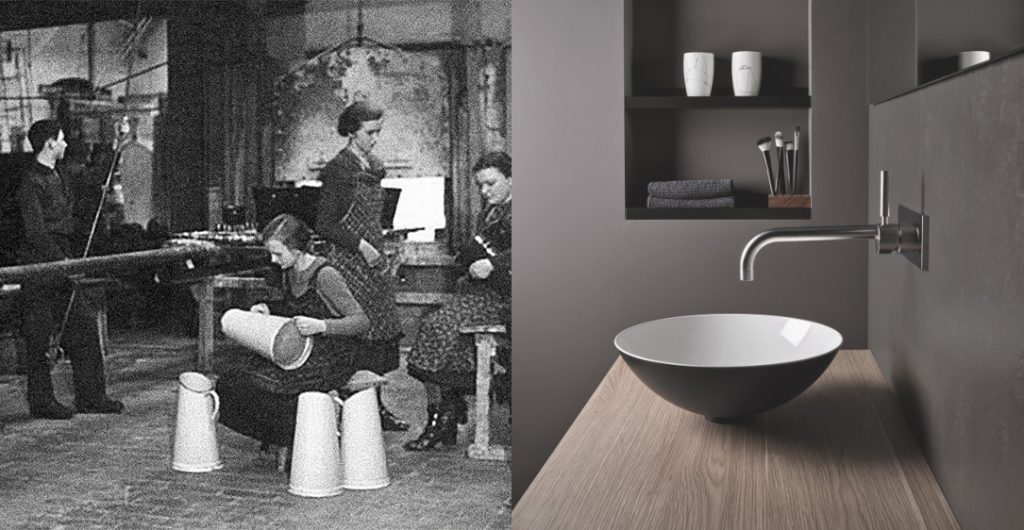 The history of Alape follows Germany’s history through the founding period, industrialisation, world wars and post-war reconstruction. Founded in 1896 by Adolf Lamprecht in Penig, Alape was shaped by the era of industrialization, and at the same time also by such movements as the Arts and Crafts Movement, which instilled simplicity and a serious approach to materials in the company, so to speak.

Milestones in the
company's history

1896Adolf Lamprecht founds Alape in Penig. The first enamel products for cooking and daily hygiene are created.
1930Alape produces the first multi-functional basin. Known today as the bucket sink, it has been sold by the millions across the world.
1954Re-establishment in Goslar, in Lower Saxony.
1970Production starts on the EW3 built-in basin – the best-sold built-in basin until today.
1973New manufacturing processes enable progressive designs. The RS 2.77 and RS 5.77 round series are launched.
1997Alape develops the first dish basin with an edge thickness of just 3 mm.
2003Alape launches the PR washbasins, introducing a new reduced expression of form.
2009With Metaphor, Alape expands its range of delicate basin variations with an angular shape.
2016Exact geometry with minimal radii – the Folio washplace becomes the pioneer of new design possibilities.
2019Tradition meets modernity - The Steel19 washplace brings the pragmatism of the classic bucket sink into private bathrooms.

People have been living with our products for 125 years. In the bathroom, probably the most intimate room, we let go of all our worries and leave everyday life behind us. Water creates the link between masterly craftsmanship and our personality. When it flows through our fingers and is held by glazed steel, a moment of originality is created. 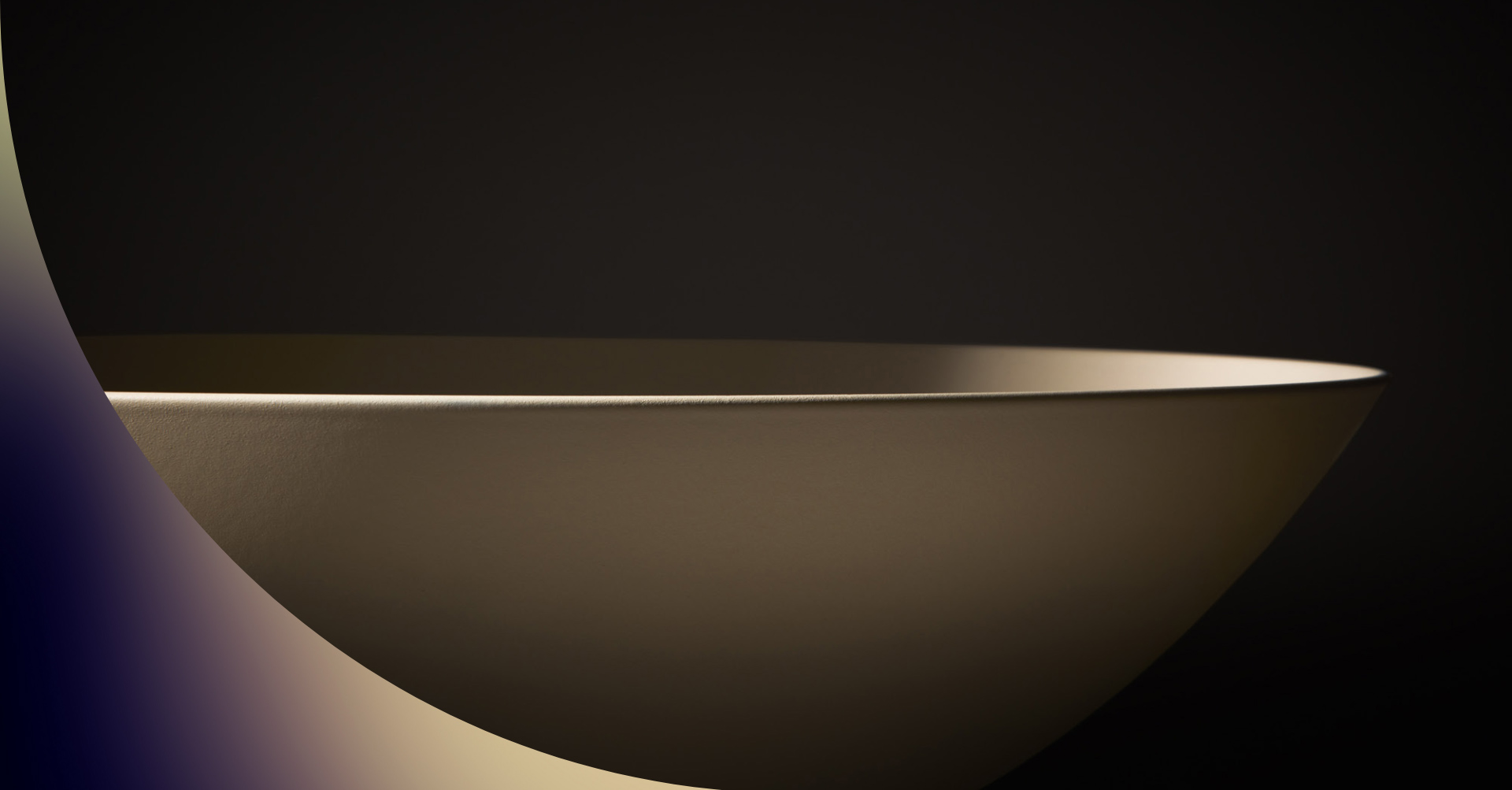 Alape’s design history is characterised by the constant exploration of glazed steel in interaction with people and architecture. Functional and holistic thinking, the highest demands on quality combined with aesthetic and timeless design lead to products that continue to be integrated into the most diverse living environments to this day. The main driving force behind the company’s continued development over the decades has always been the dialogue with designers, architects and people who live with Alape’s products.

After Alape had positioned itself in an architectonic setting with its own designs, such as the world’s first industrially manufactured EW 3 built-in basin, a new era began in the early 1980s in collaboration with Dieter Sieger – an architect and shipbuilder in his own right. What began in an emergency situation during the completion of a yacht at night was the start of a decades-long collaboration with our design partner sieger design that continues to this day. 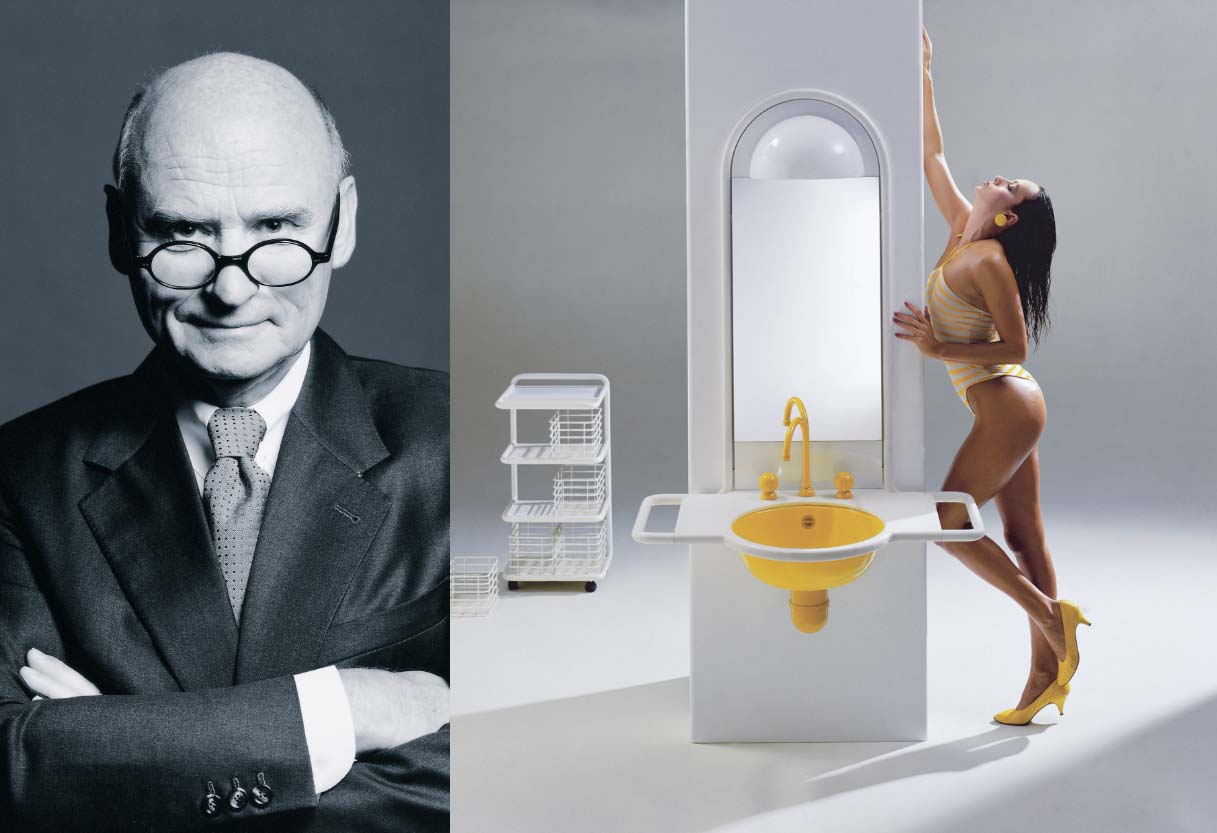 “It’s basically thanks to him that I get to pursue industrial design today. This man made it possible for me to develop products that certainly no other company would have been willing to do at that time.”

The revolution of
the washplace

For Dieter Sieger, bathrooms had a higher significance than just minimal wet rooms as was the norm during that period. In shipbuilding, he had learned to design unique solutions with minimal space requirements for discerning customers. That is how, by 1982, the washplace “LavarSet” came to life. It was presented in 1983 at the ISH international trade fair for the sanitary sector. This washplace was a shining object and at the same time an expression of one’s personality. Influenced by shipbuilding, the design was characterised by curves and formal concentration. The underlying system approach left room for individual design. However, at the time it was not just the product, but the pavilion itself, which was specially designed by Dieter Sieger for the ISH, that became the sensation of the trade fair.

“LavarSet” was the launch pad for a host of sanitary products, some of them ground-breaking, that became emblematic of postmodernism. Since then, the bathroom has evolved even more into a place of self-identification, and even after four decades, the urge for ever new aesthetics and functional solutions remains unbroken. Today, business economist Christian Sieger and designer Michael Sieger run the design office. The collaboration results in products with design and functional clarity that are modular and versatile, such as Steel19. The re-design of the classic bucket sink brings the pragmatism of that period to the home bathroom in new perfection.

The wash bowl forms the beginning of Alape’s design history. What began as a simple enamel product now represents an essential gesture – to catch and hold water, in its most beautiful form. It is therefore not surprising that the archetype of the wash bowl was the starting point of the design process with Gerhard Busalt when re-designing the classic – a reinterpretation that was unparalleled at the end of the 90s and continues to have an impact today.

“These bowls and their focus on the shape and the bare essentials fascinated me and I then reinterpreted them with my design. I have always loved bold shapes. Particularly when it comes to a product that cannot expand into a huge area. The shapes must then reduce and simplify the volume of the object but highlight its functionality.”

The story of the dish basin begins with research by designer Gerhard Busalt, who worked as a freelancer for Alape in 1995. He focused on enamel bowls that were used for washing during the Biedermeier period and were made of thin steel. This led to an idea the designer could not get out of his mind.

The movement we make when washing our hands played a key role in the designing process: they take on the shape of a sphere. Busalt opted for a spherical segment that replicates a third of a sphere. With its launch in 1997, Alape succeeded in creating the first delicate enamelled steel bowl that brought a whole new look to the bathroom.

The dish basin has not lost any of its appeal. On the contrary, thin-walled basins have made their way into the sanitary sector. However, the clarity and precision of Alape’s basins are still a standard of perfection. The classic dish basins are the inspiration for numerous new developments. Sondo brings sensuality into the bathroom with its soft shape. The most recent addition to Alape’s portfolio is Stream – a larger dish basin in sombre pastel shades.

More about our novelties

Alape’s intense contention with surfaces is a response to very basic needs. Surfaces represent the interface between the human body and the material world, and influence our well-being. The closer we are to the things that surround us in everyday life and the more intimate our relationship is with them, the more important the sensual and emotional moments become. 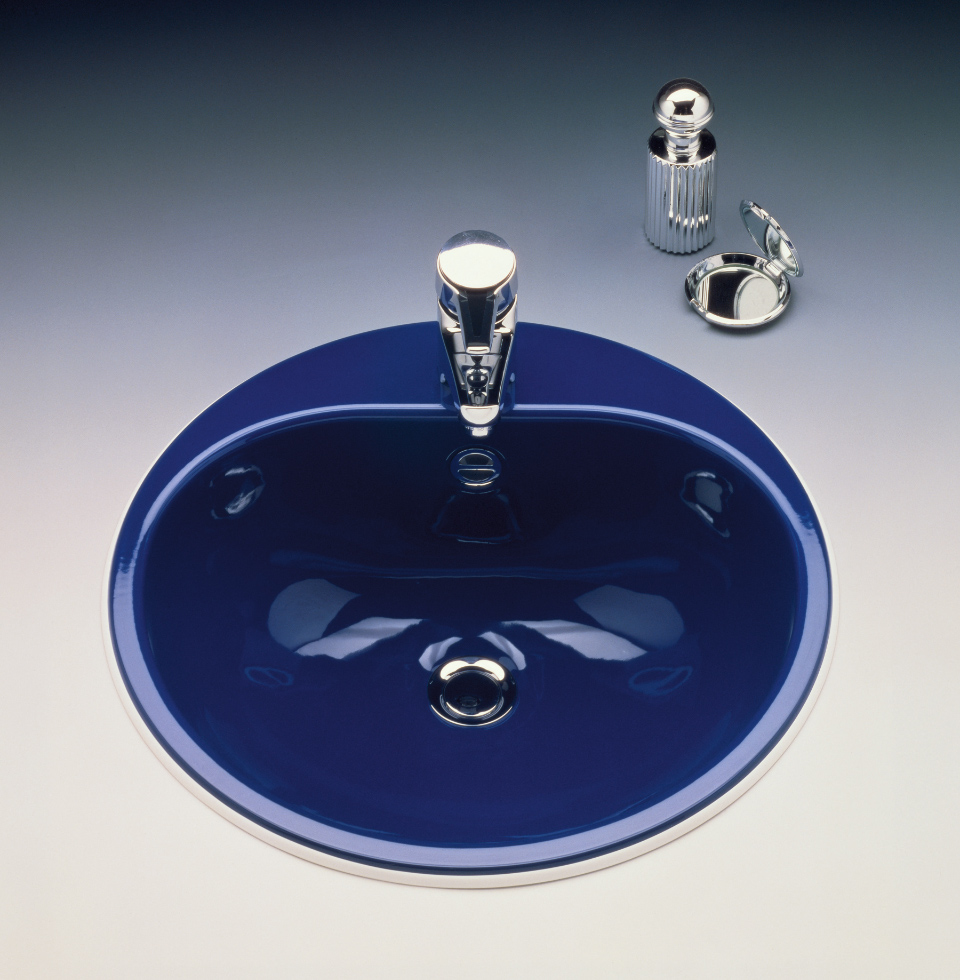 Colours and surfaces were already a defining topic when the EW 3 built-in basin was introduced in the 1970s. Alape has responded to the trend for expressive interiors with new colour concepts. To this day, expertise in finishing plays an important role in the development of our products. While a wide range of colours is already possible, developments in surface structures have increasingly taken a firm place in product design in recent years.

It is the interplay of colour and textures that makes surfaces come alive and tangible. The most original and authentic space that we humans know is nature. Many of the emotions that evoke the specific material properties within us are firmly embedded here. Analogies to nature inspire us to create multi-sensory surfaces that allow us to form a deep connection with the products.

Water has always inspired us. Especially the way it flows and fills our basins with life. Water is not only probably the most precious element on this earth, it also fascinates us with its depth and the infinite facets of its appearance.

In the AQUA range, products have been created that are as alive as water with light making the colours and different transparent tones dance. The individual pattern of the enamel achieved through manual application makes every basin unique. 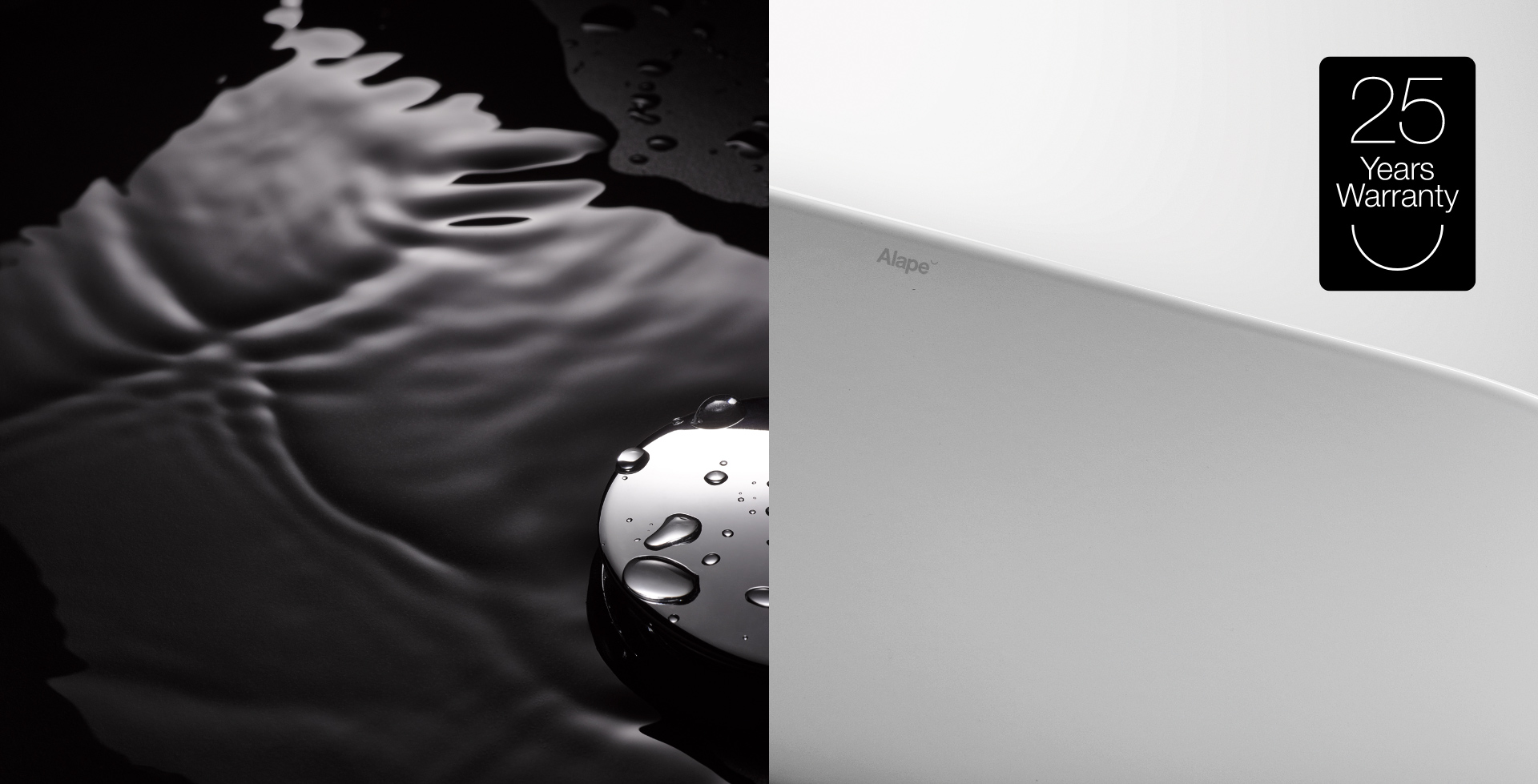 Alape’s glazed steel washstands are not only timeless in their design, but also robust and long-lasting. When steel and glass combine, the result is a material that is extremely resistant, scratch-proof and easy to care for. We are so convinced of this that we now offer a manufacturer’s warranty of 25 years* on our basins and washstands.

Glazed steel combines the strength and malleability of steel with the temper and chemical resistance of glass to create a unique composite material. The closed, non-porous surface is absolutely hygienic, colour-fast, fully corrosion-protected, scratch-resistant and robust. The brilliantly coloured glaze is even impervious to climatic influences and strong UV radiation. Durability “Made in Germany”, now with a 25-year manufacturer’s warranty*. 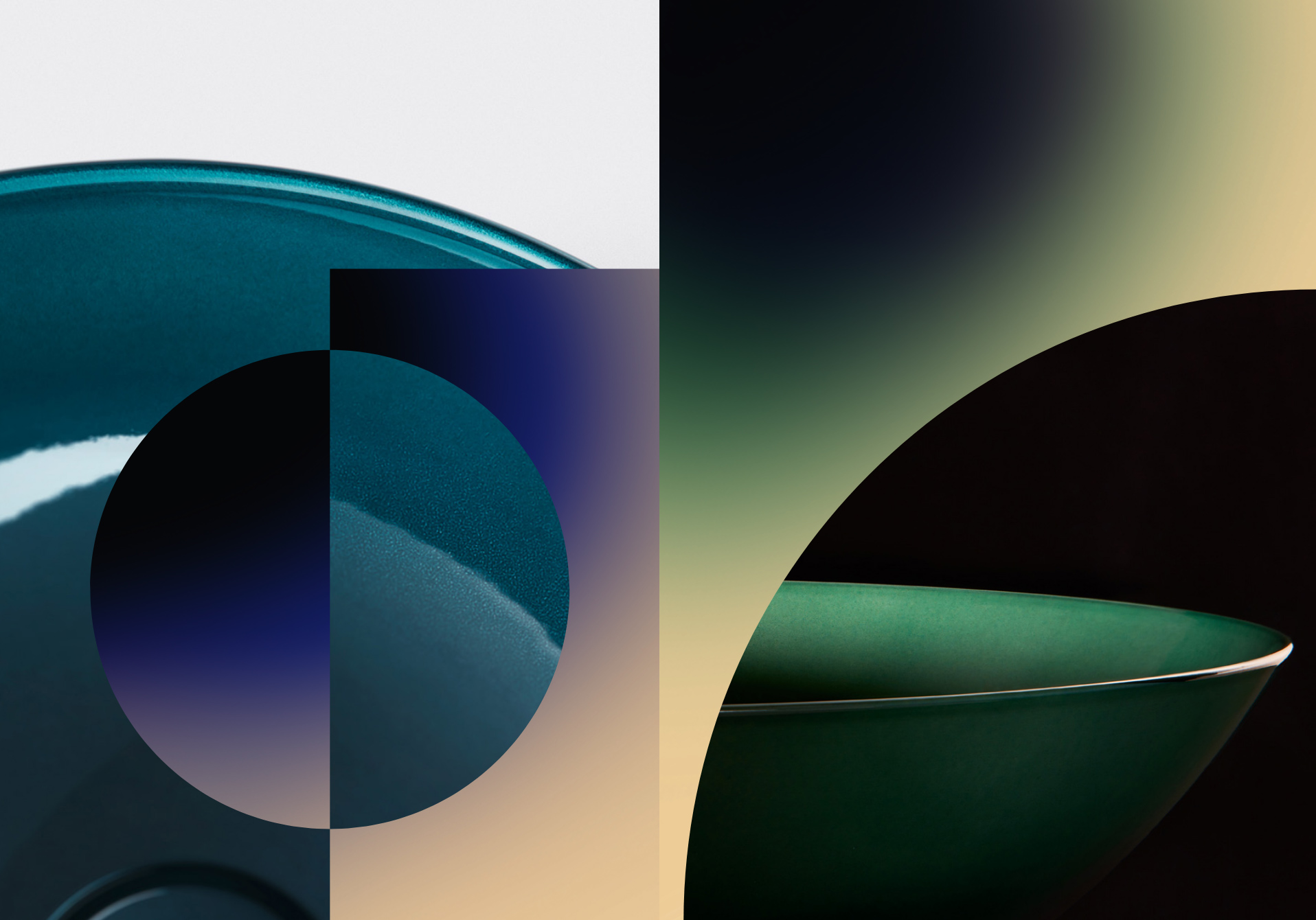 in all its facets together with us.

Any cookies that may not be particularly necessary for the website to function and is used specifically to collect user personal data via analytics, ads, other embedded contents are termed as non-necessary cookies. It is mandatory to procure user consent prior to running these cookies on your website.